The Homestead Journal~ Week 43~ Cold Weather and Good-bye to a Friend.

Homestead Happenings
Monday we babysat for a friend. We got to hang out with her little ones while she was at school and she treated us to pizza. Olivia sure does love her babies so I let her hold the baby girl for a little bit. She is so good with them, a natural mother. Quinten is also very good with babies and he had no problems getting the baby boy to nap. 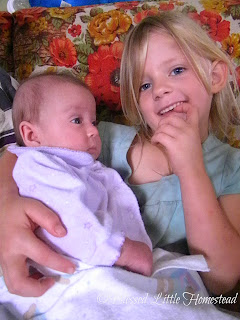 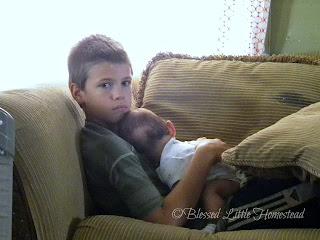 Last week, Lucas had been under the weather. He had a fever off and on all week and was very snugly and nursed every moment I was home. I have no idea what was wrong, but he didn't seem sick. I suspected teething at first, but when we hit the one week mark on Monday, I became a little worried. My husband gave him a blessing and by Tuesday he was back on track. I am almost positive that it was due to a developmental spurt. This past week Lucas has been more intellectually interactive and his curiosity and attention has changed as well.
The week started off chilly and rainy, but Wednesday the sun came out.  Its been a little chilly, well a lot chilly. I love fall weather, but once its here I really don't want to commit to the cooler temps.. Can't fall just be one or two days a week?

What We Are Learning About
The boys are finishing up their insects project. They are putting their reports together. Jacob took this amazing photo..  its a Buck Eye Butterfly 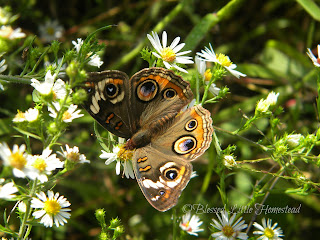 Zachary has been declared an official reader. I have suspected for a while, but when I ask him to read me from a book, he says he can't and he doesn't understand. However, I have noticed him reading my Facebook comments and other things I type online. . So I put him to a test. Yep, he's a reader!
Olivia has been doing wonderfully at math. She has also been expanding her vocabulary. I noticed when she was being sassy with her sister one morning.

Isaac is doing well in his state study books. He is a journal-er and is writing down facts that he finds interesting. Abigail is working in an animal study workbook. Its geared for a younger age but she is reading additional books from the library on the animals, she likes to draw and color the animals on the pages.

Our Adventures
Wednesday we went to the library.. Daddy is working nights now, so he stayed home to sleep,  so it was a little bit more of an adventure. The littles did pretty good. Ezra stayed busy and Lucas had a little less energy then normal due to his being under the weather for the past week. We are down to visiting the cows once a week for now. We headed out Saturday evening and grabbed some ice cream while we were out. It was a chilly eve, but hey, it was ice cream

On Our Bookshelf
We borrow alot of books from the library. The children pick out their own books, and I grab some that I feel they need for school. This is a somewhat partial but nearly complete list

they just got a handful of little board books and a few Curious George books.

The Older's Books
Jacob is should be reading  Road to Serfdom for economics. He is also reading the New Testament for seminary
Quinten is reading The Egyptian Box
Abigail read more Nancy Drew books
Isaac read Indian cupboard Invisable man
Zachary is reading books from the Magic Tree House series

What We Are Watching
Transformers: Dark of the Moon (Jacob watched on his night) it had a few inappropriate scenes but the story was decent.  ★★★
Highway to Heaven Season 1 ★★★★


Abigail and Isaac have been using Book Adventure to quiz on the books they read. Check it out!

Challenges/Accomplishments This Week
I had to say goodbye to an old friend. Our poodle we adopted 10 years ago passed away. Here is his story
It was really hard to say goodbye, I know he was up in age, but I always wonder, is there something I could have done differently?

Link/Quote/Photo to share
I am going through my homeschool bookmarks, here are a few of my favorites
WhizzBall  Art Projects  Watch Know Learn

Linking up with these Blog Hops

Email ThisBlogThis!Share to TwitterShare to FacebookShare to Pinterest
Labels: The Homestead Journal

Thanks for reading and leaving your thoughts.

If you choose to leave a comment, put a username in the dropdown box that says Username/URL. You can usually leave the URL box blank, or if the system requires one just put in my URL. Harassing comments from anonymous people will not be published. You will need to sign in if you wish to be rude.

Don't forget to check the "notify me" box to get updates on comment replies!
This makes it easier for conversation. Thanks!

Pay Attention to this...

Photography has always been a hobby of mine. I don't aspire to be a professional. Its just something I like to do. I started with film in High School, but love the invention of digital.

I am a natural light, lifestyle, spontaneous photographer. This means I take photos where I am on the fly when I see something I want to take a photo of :) I am a Photo-shop free photographer. I may crop or adjust exposure and add my watermark. But most of my photos are untouched. I am currently using a Canon 50D. Some images are shot with iPhone 4. I have previously used a Nikon L100.

Favorite Blog Posts By Others